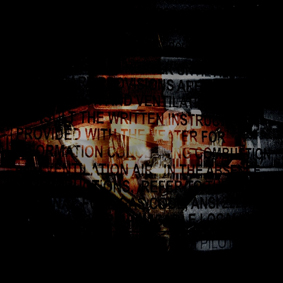 Two long form power-noise / industrial/ / dark ambient tracks, consisting of many different compositions created between 2005 and 2008. This LP is (for the moment) being offered as a free download, to determine if people are interested in any and/or all of the sonic elements found within these two tracks. Although the tracks are synthetic, they also contain traces of highly distorted vocals, guitar manipulation, and field recordings, thus adding additional dimensions to compositions that are not usually found in 'typical' noise creations. Furthermore, these noise creations also do NOT focus on furthering hateful ideologies or misanthropic tendencies, as is unfortunatly the case with many 'extreme' power-noise / hardcore acts. Instead, the project is aimed at creating expressive works of intense noise, distortion, and intriguing frequencies.

If, after listening to this project, you find something you enjoy and/or approve of, feel free to get in touch and share your experience on what you liked/disliked about the album.

Nihil Obstat : The Way Is Cleared.
Reality is living the undying dream.


The harsh noise side-project of John Lithium, Nihil Obstat has only one objective : to create punishing, intense, and non-ideological noise, power electronic, and industrial dark ambient constructions. The two tracks contained within 'The Undying Dream' are two long-form compositions (mostly improvisational in nature), consisting of many different compositions I created between 2005 and 2008. Beyond severe synth processing, traces of highly distorted vocals, guitar manipulation, and field recordings can be noted within the mix, thus providing additional dimensions to the auditory barrage, elements which are not found in 'typical' noise creations. Furthermore, these noise creations also do NOT focus on furthering hateful ideologies or misanthropic tendencies, as is the case with many 'extreme' power electronics / noise musicians (which tend to detract from their otherwise awesome creations). This project instead seeks to uncover new modes of auditory intensity through varied distortions and frequencies.

This Project Sounds Like / Is Influenced By: Although we do not set out to emulate other noise artists, several bands / artists which can be considered influences or peers are: Beyond Sensory Experience, Coil, Control, Drakh, Fire In The Head, Griefer, In Slaughter Natives, Institut, IRM, Kaiten, K. Meitzer, Love Is Nothing, Merzbow, Navicon Torture Technologies, early Lustmord, Prurient, Sword Heaven, Throbbing Gristle, Wertham, and Whitehouse.


Nihil Obstat : The Way Is Cleared.
Reality is living the undying dream.

Reviewer: Cursed Chimera - favoritefavoritefavoritefavorite - May 2, 2008
Subject: A nice Slow Crawl
This music eases forward so cautiously for being noise, a refreshing take if you will. For fans of slower, brooding dark ambient/industrial noise.

Uploaded by Clinical Archives on April 24, 2008